Join other practicers and get tips and techniques right to your inbox.

Get the news right in your inbox!

Add some variety to practice time with your child and try out some of these 50 ways to say “Do it again” during violin practice. 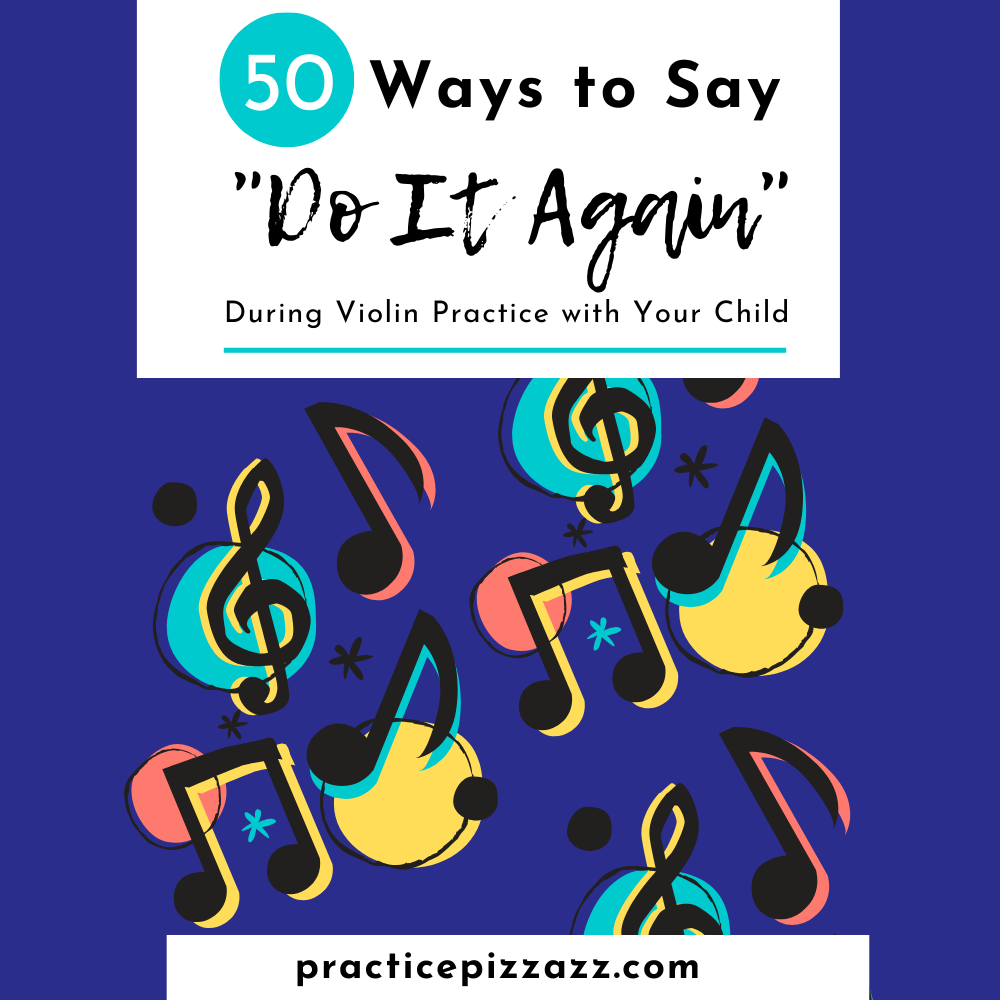 This post may contain affiliate links. If you purchase something through an affiliate link, I will receive a small commission at no cost to you. For more information, read the disclosure. 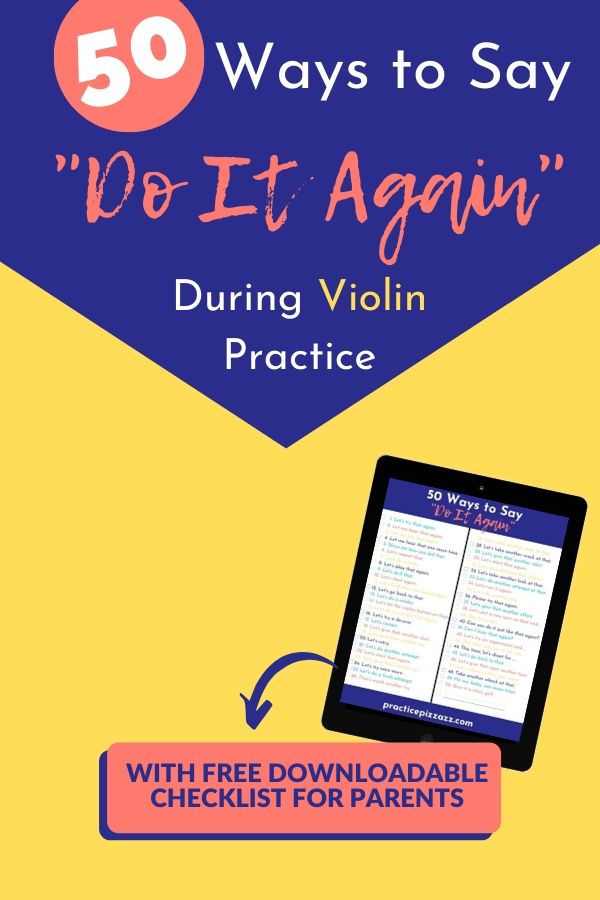 Does this sound familiar?

Violin practice at home can sometimes settle into predictable and–dare I say?–boring patterns. And if you’re normal, you and your violinist might even butt heads a bit when you tell your child to try something again. Have you ever said, “Do that again,” to your child, then been greeted with a pleasant, special, endearing image that looks something like this? 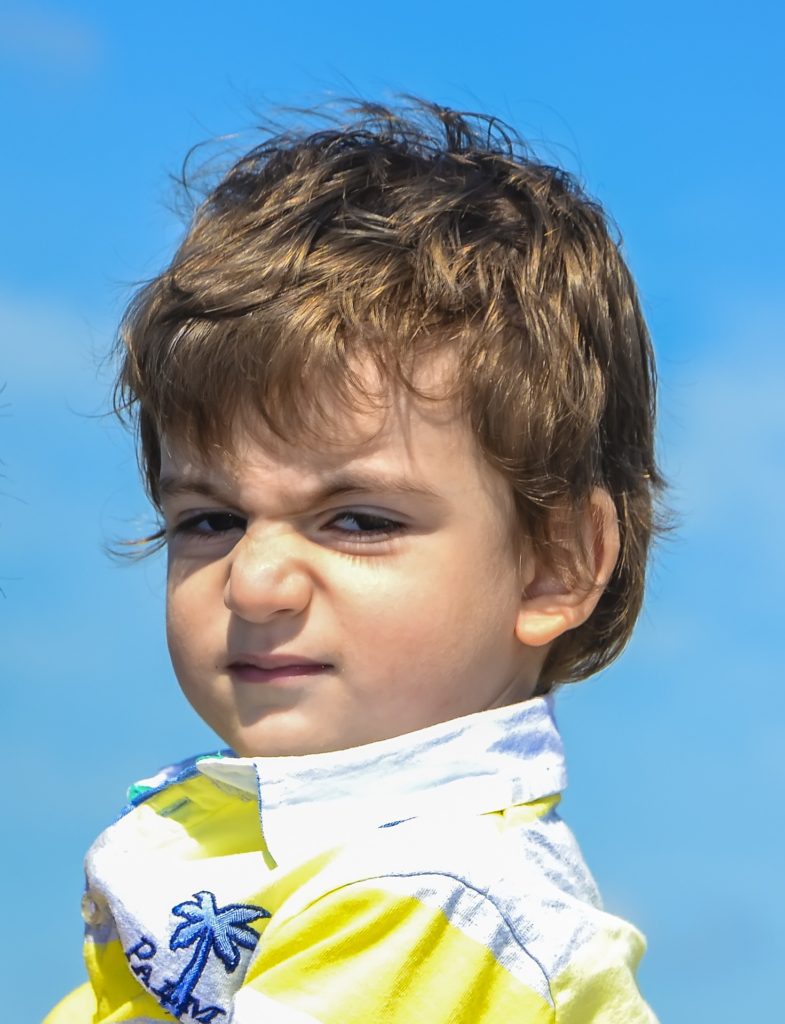 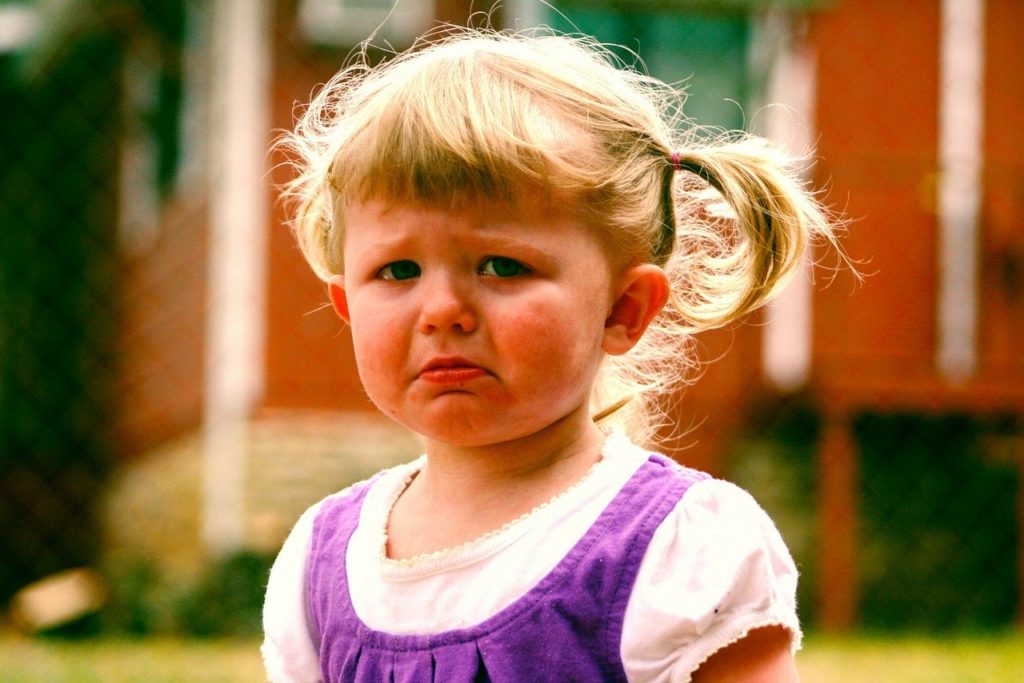 Or maybe your violinist gets glazed-over eyes when practicing, and you just know that their brain isn’t engaged. It’s probably daydreaming of playing outside with their friends, reaching the next level in that video game, or finishing that art project splayed on the table. And you just need to help them jolt back to their practice.

And maybe in your mind, you’re going over the shopping list and the dinner menu. Maybe you’re making a mental list of chores to do, appointments to make, people to call… And you hear an out-of-tune note but just decide to let that one slide. Then a few more. And a few more.

Or maybe your violin teacher prescribed a certain number of repetitions, and you know you’re going to have to be the enforcer. 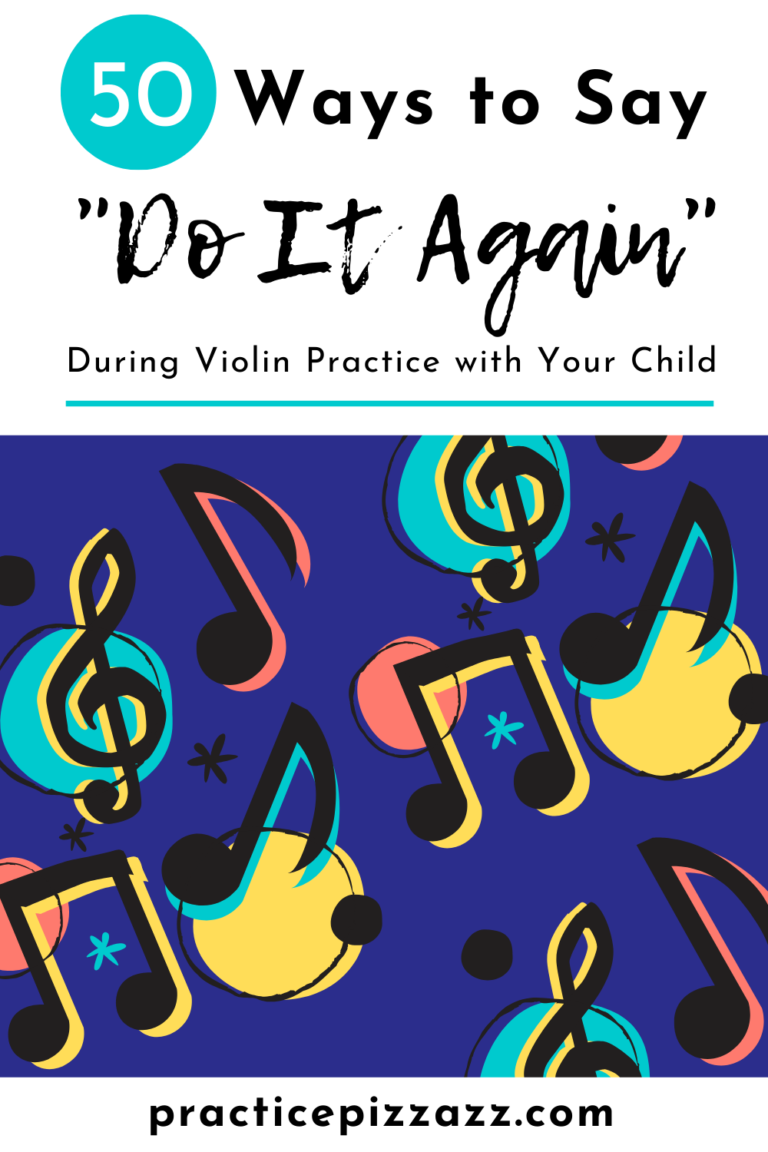 Why we need to change up our language

These can be tough situations.

If you’re practicing with your child and find yourself always saying, “Try that again,” or even hollering, “Wrong note!” from the other room, both of you are probably ready for a change.

Even if your violinist is to the point of independent practice, all of us benefit hugely from having someone we love nudge us to push ourselves.

In fact, what we’re doing by asking for more repetitions and attempts is training our violinists to know when it’s time to do it again. The more they hear your voice asking kindly and lovingly to for more practice, the more they’ll internalize that. Eventually, they’ll get to the point where they won’t need you to gently ask or remind them. They’ll do it on their own!

So by giving helpful nudges, we’re helping our kids create healthy practice habits and also helping them develop and automate that little voice in their head that tells them they really do need to not just keep playing but stop and thoughtfully try again.

50 Ways to Say “Do It Again” During Violin Practice

This week, hit reset on your practice dynamic and surprise your violinist with some fresh vocab. I brainstormed 50 ways to say, “Let’s do that again.”

Say these to pull both of you out of a practice funk and get those repetitions done.

My favorite one is number 50….But I’m a sucker for a bit of dramatic flair. How about you?

4. Let me hear that one more time.

14. Let’s hit the replay button on that.

28. Let’s take another crack at that.

29. Let’s give that another whirl.

31. Let’s give that another chance.

33. Let’s do another attempt at that.

37. Let’s give that another effort.

46. Let’s give that spot another turn.

48. Take another whack at that.

(Sorry, I couldn’t resist adding that one. Captain Holt hilariously says that to one of his employees in an episode of Brooklyn Nine Nine.)

The Importance of Word Choice

You might have noticed that lots of these start with “Let’s.” Starting with that word is a great way to show your violinist that you’re a team, and you’re there to help. “Let’s” isn’t threatening or irritating. It shows you care and you’ll stick with hard things, too.

Not too many of the 50 I listed are a question. If you’ve got a sassy one on your hands, asking a question is setting yourself up for a no (and maybe an ensuing struggle). But once in awhile, a question is a nice way to mix it up and also let them know that they can take charge. When you ask, “Can I hear that again?” and they answer by obliging, they’re taking control of the situation and claiming ownership.

How do you usually tell your violinist to try again? Is there one catchphrase you always use? Which of these 50 new phrases will you try out this week during violin practice? Did I forget any good ones?

How would the atmosphere and productivity of your at-home practice change if you tried all 50 of these this week? My experience has been that both the parent and the child feel more satisfied, accomplish more, and build their relationship steadily. And that’s really what practicing violin with your child is all about. It’s not about being perfect or about practicing the most. It’s about building a better and closer relationship and sharing your love of music.

Download a checklist with all 50 of these phrases and tick them off as you say them during the week. 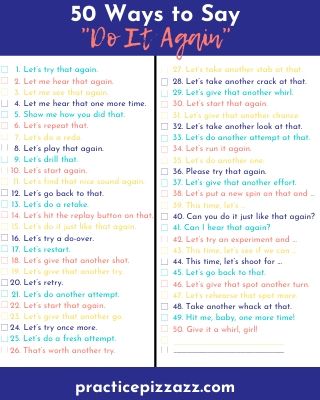 If you take the challenge to use all 50 ways to say “Do it again” during violin practice, let me know your results in the comments below! 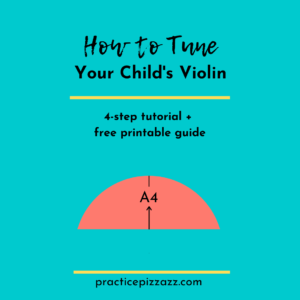 How to Tune A Violin: Tutorial for Parents 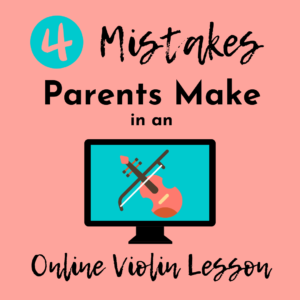 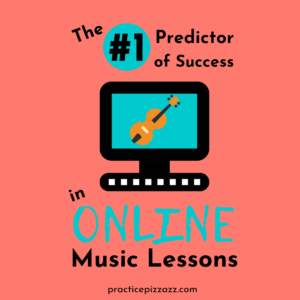 The #1 Predictor of Success in Online Music Lessons 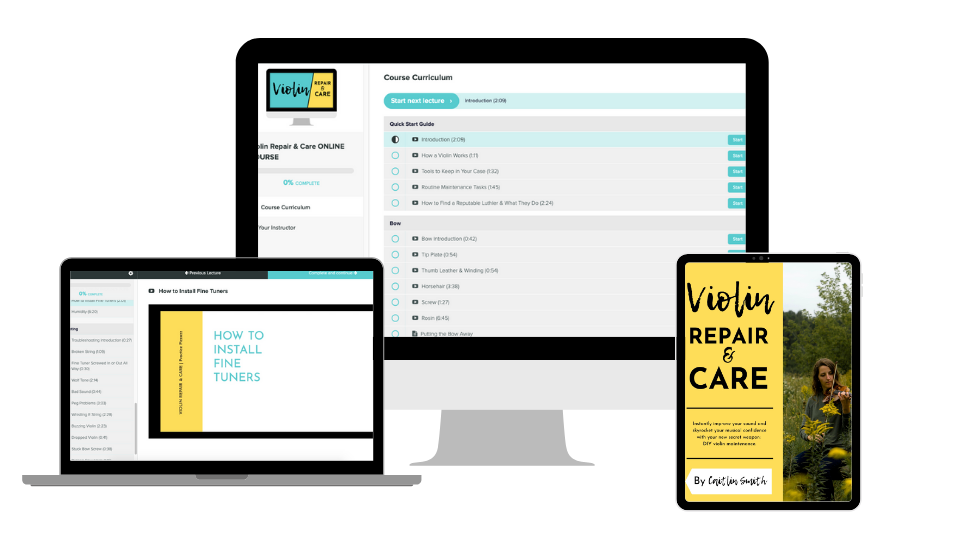 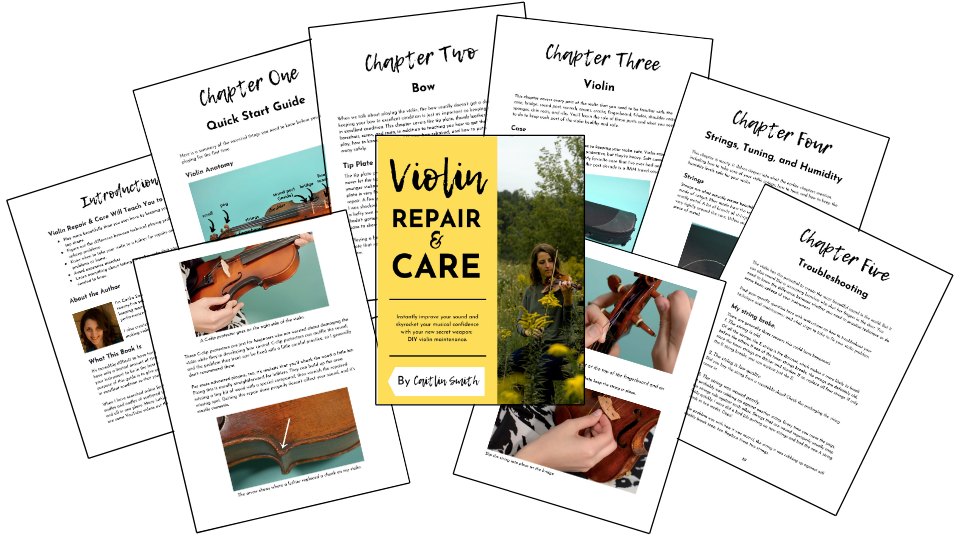 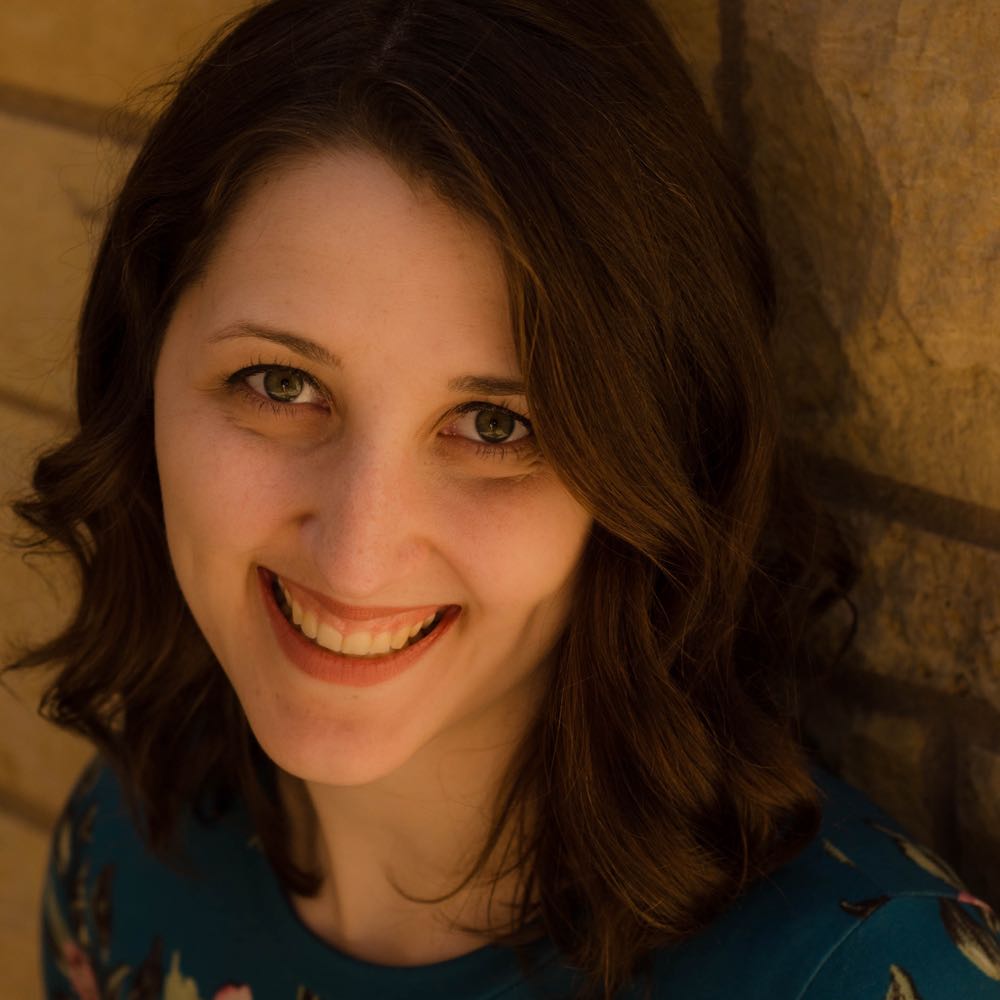 I’m Caitlin, a violin-playing, Harry-Potter-reading, pug-adoring musician. I love kids and the violin, and I love teaching kids the violin. I created Practice Pizzazz to help you have fun learning and practicing, all while keeping technical and musical integrity. Read More 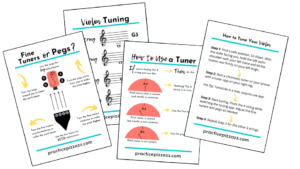 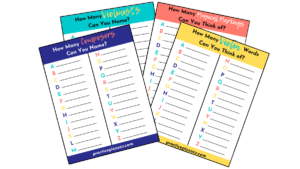